Following on our investigation of the Namco 04xx, here we look at the sprite bitmaps found in Pole Position. We know that both 32x32 and 16x16 sprites are supported by this hardware.

Sprite bitmap ROMs are found on Pole Position schematic sheet 14B. We find that five pairs of 8k x 8-bit ROMs are in the schematic. However, only four pairs are actually populated in the original Pole Position (missing are those marked x29 and x30).

With 4 bits per pixel, each ROM-pair can hold either 32 large sprites, or 128 small sprites. We find that only the x25/x26 ROM-pair holds the smaller 16x16 sprites.

A simplified block diagram appears below (only 32x32 sprites shown). 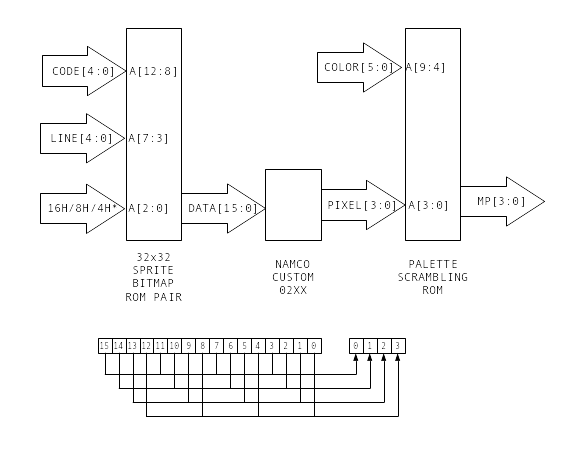 The CODE, COLOR, and horizontal bits are generated by the previously-described Namco 04xx. The LINE[4:0] bits select the vertical position within each sprite. Each sprite data word is a 16-bit value containing four 4-bit pixels. These pixels are extracted, in succession as shown in the diagram, by the Namco 02xx downstream.

The first two sprites in the Pole Position ROMs are used, side-by-side, for the player's car pointed straight forward. The COLOR permutation COLOR[5:0]=0.

There are twelve sprite pairs, CODE[4:0]=0 through CODE[4:0]=23, depicting the player car at increasing angles of a right turn. The sprites are mirrored for turns in the left direction.

Cleverly, the animated computer cars are simply the same data as the player car but using a different palette permutations. The results are:

Next time we continue looking at more of the sprite bitmap ROM contents.